In this entry, I’m going to try and show you what might be the most fundamental concept in all of physics by talking about some of the universe’s most mysterious objects: cats.

Whether it’s the perpetual obsession with sleeping in boxes, the constant desire to go outside and then immediately come back inside, or their fascination for canned spaghetti (this may be just my cats), the mind of a feline would appear to be an utterly undecipherable thing. But every cat owner has attempted to understand its cat’s behavior in some manner, and I’ll try to explain this process to those who have never owned a cat.*

*Cat people will agree that it’s technically the cat that owns you.

In attempting to figure out my cat’s strange culinary preferences (which appear to include everything from Swiss cheese to guava paste), I decided to leave some broccoli out on a plate one day and see if he’d take a bite. At the end of the day, my cat decided to leave the plate of broccoli untouched; rejecting them for the roasted chicken leg I was holding in my hand at the time, and leading me to conclude that my cat indeed does not like eating his greens.

To present the above in a more abstract way, I had attempted to make a guess at some aspect of my cat’s behavior, which can be described by a statement like “My cat does not like eating broccoli”. Now, since the nature of a cat is inscrutable, I have no way of fundamentally knowing what my cat truly likes eating; but I can attempt to associate my prediction of my cat’s food preferences with some measurable constant quantity like “the amount of broccoli on my cat’s plate”. If the amount of broccoli on the plate didn’t change after a day or two, then I’d reason that my cat didn’t eat any because he tasted it and didn’t like it. If instead I see that the amount of broccoli drops by some amount every day, I might say something along the lines of “my cat enjoys eating broccoli every day”. Simple!

Although strange at first glance, the association of a behavioral prediction/statement with some constant quantity is something we do every day. You may predict your father likes steak because he visits a local steakhouse a regular amount of times a month, for example; you may also observe that a friend takes a constant type and amount of pills every week and conjecture that he suffers from a chronic medical condition. Both behavioral statements, “my father likes eating steak” & “my friend has a chronic condition”, are fundamentally tied to some constant quantity that we can observe (“the amount of times my father visits a steakhouse a month” & “the amount/type of pills my friend takes a week” respectively).

Now, I can take it a little bit further philosophically and (cue the Inception horn) make a statement about my statements of what my cat’s behavior is like. An obvious one is to assume that my statements are always going to be right; that is to say, that a statement I make now will hold for all of time. That does not mean that my cat’s behavior can’t change over time; it just means that I have to describe that change in my statement, which itself cannot change over time. One may argue fairly easily, from a philosophical perspective, that this is a requirement in order for the statements to be correct or consistent. But the point is that this meta-statement about the “correctness” of my statements is a statement in and of itself.

With all of this in mind, consider that a theoretical physicist’s job is to devise a series of statements/predictions about the behavior of everything in the universe; these being what we call “the laws of physics”. All of these laws can be judged to be “consistent” by stating that even though things in the universe may change over time, the laws of physics themselves shouldn’t change over time. Nothing controversial about that!

But what is absolutely stunning is that a very smart mathematician realized that this statement about the consistency of the laws of physics is also associated with a measurable constant quantity just like in my cat’s example! And in fact, this mysterious conserved quantity tied to the consistency of our laws of physics is something called energy. The whole point of this preamble was to get you to believe me when I state what might be the most fundamental principle in all of physics:

Conservation of energy is the consequence of unchanging laws of physics.

Consider what would happen in a universe where the laws of physics did change over time. I’d perform an experiment today and get some result; then I’d do the same experiment the next day and see something completely different! In fact, it would become completely impossible for science to exist at all since I wouldn’t be able to make any lasting conclusions based on my experimental observations. In this alternate reality, we’d have no guarantee that we wouldn’t suddenly fly out of our office windows, transform into polar bears, or collectively develop a sharp hatred for people who wear lime-green sandals. The entire concept of engineering goes into the gutter since buildings could just spontaneously transform into VHS cassettes of The Sandlot. Our existences would be a chaotic nightmare; our unknowable universe would just be one big metaphorical cat. Thanks, science!

For another fun fact, that very same mathematician I mentioned above went on to state that if the laws of physics are consistent across all of space as well as time, another conserved quantity shows up called momentum. Regardless of whatever definition of energy and momentum you may have been taught in high school, their true definitions are “the things conserved when the laws of physics are consistent in time and space (respectively)”. Now you know the real reason why your teachers kept mentioning those two things over and over! 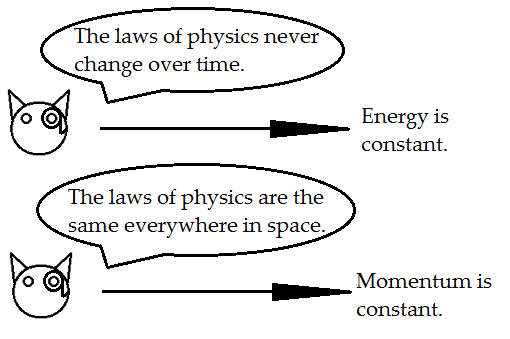 I’ll finish off this post by saying that scientists have a funny term for these kinds of meta-statements about the laws of physics, and that many people dedicate their careers to proving or disproving these by performing experiments on the quantities associated with them. In fact, a very smart physicist discovered through such experiments that a meta-statement we intuitively thought was correct (“left and right are relative concepts in the laws of physics”) was actually completely wrong! Who knows; perhaps our universe is more cat-like than we thought.