Physicists are not much fun at parties. Conversations with us about the universe usually follow a common pattern; you’ll mention or discuss some creative and interesting idea about reality like “cold stars” or faster-than-light travel, and we’ll coldly shut the idea down with some unnecessarily verbose, almost pedantic technobabble. In this entry, I’ll try to explain why our consistent stuffiness is an acquired trait of the business, and how being boring with our ideas prevents us from conceptually destroying billions of galaxies.

Say somebody asks you to write the next novel starring Hero X, the star of a multi-decade science-fiction franchise. Enthused, you proceed to write about his thrilling adventures in the Crab Nebula, only for your editor to tell you that the Crab Nebula got blown up in a comic book spinoff starring Hero X’s dog companion. You then try to write a story about stopping a cryogenically preserved Soviet cyborg, until your editor lets you know that the Soviet Union never existed because a side character in Hero X’s time travel novel mentioned Tajikistan in 1934. Eventually, you decide to write a quaint book about Hero X facing his inner demons during a beach retreat in the Maldives; that is, until the editor mentions that the creator of Hero X wrote a letter to a fan stating that Hero X is terrified of the ocean and that the Maldives were teleported onto Deimos in an audio drama from the 1980s. At this point, you would probably strangle your editor and start your own franchise unless you were insane (or a physicist).

See, devising interesting and creative ideas in physics that stick is difficult in exactly the same way as writing a Hero X novel; any single addition to our catalogue of creation interferes with everything else in monumental ways. Inventing anything that goes even slightly faster than the speed of light means you can now time travel into the past. Making a single magnet with only one pole causes electric charge everywhere in the universe to be restricted to specific values (this may actually be true). Creating a machine that harvests the tiniest amount of energy out of nowhere means that no coherent laws of physics can exist, as I explained in my previous post. Even an idea that seems harmless, like assuming that there is some inconceivably small minimum distance in the universe, puts the “relativity” part of general/special relativity straight in the shredder. Even though these examples would take far too long to elaborate on in this single entry, I’ll discuss in relative detail another creative idea physicists had some years back with similarly unexpected consequences.

Here’s a thought; say that there’s some large, isolated patches of the universe made up purely of antimatter, with antigalaxies and antistars and antiplanets full of antipeople just like you and me. Doesn’t seem like a problem at first glance, right? Antimatter is just matter with the electric charges (and some other things) flipped backwards, and that doesn’t really stop you from generating all the elements needed to make anti-you. In fact, the laws of physics don’t seem to indicate any difference between matter and antimatter other than that little inversion quirk, so why shouldn’t there be just as much antimatter floating around somewhere?

The first problem with this idea is that the “borders” of these antimatter domains would often come into contact with our own normal matter domains; and since matter and antimatter don’t like each other very much, these collisions would utterly delete everything in their immediate vicinity from existence (normal and anti), triggering bursts of intensely powerful light that would serve as the single brightest events in the known universe. Given that quite a few experiments have been looking for these huge flashes to no avail (and trust me, we’d see them), this little attempt at creativity of ours would seem to be a bust.

Another, even bigger, problem; if the universe was actually made up of equal parts matter and antimatter, there’s no reason why both kinds of matter wouldn’t have destroyed each other completely right after the Big Bang, when the universe was the size of a walnut! We’d have been left with an empty universe, filled only with faint, dead light. Consequently, we are forced to conclude that the laws of physics discriminate in some tiny way between matter and antimatter, and are left to figure out why this caused our universe to be composed of (almost) exclusively matter. Good luck, theorists! 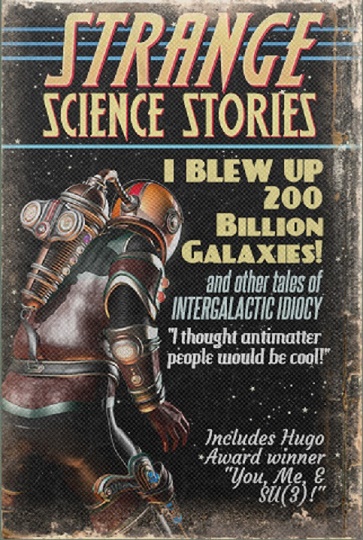 This should give you a bit of insight as to why the last two major theoretical advances in physics, quantum mechanics and relativity, have been such complete retcons of our previous laws of physics instead of just additions “tacked on” to the old ones. Imagine how conceptually crowded physics was back at the start of the 20th century that the only way scientists could explain (without contradictions) why lava glows red was by developing a theory that lets everything have the probability to exist almost everywhere in the universe at the same time. This is like getting away with your Hero X beach retreat novel by writing a chapter where an intergalactic version of the CIA finds an exact clone of the Earth (Maldives and all) in the Andromeda Galaxy, controlled by aliens that have replaced all the water with a virtually identical synthetic compound. Hell, I’d read that!

I’ll finish this entry by mentioning one of the very few ideas in physics that is both simple and non-disruptive; dark matter. To make a long story short, a scientist in the 70’s realized that for galaxies to spin the way they do, either 1) Einstein’s theory of gravity is fundamentally wrong or 2) there’s a bunch of invisible stuff we haven’t discovered yet floating around in every galaxy. Ambitious and creative theorists have jumped at the chance to rewrite the laws of gravity to account for this, but the above examples may clue you in as to why these theories have not been largely successful; rewriting even a small piece of Einstein’s equations leaves you unable to explain why stars last longer than 2 weeks or why light bends around stars the way it does. On the other hand, if you just assumed that there’s a specific type of particle in existence zooming around that’s invisible to our telescopes, then that’s all there is to it! No need to rewrite every known principle in the laws of physics. All that’s left is to actually find the damn thing, which is (of course) hilariously difficult; but there are dozens of scientific collaborations filled with people much smarter than me working on it. I should know; I used to work for one of them! Wish them luck, and don’t be too hard on your physicist friend when he tells you that black holes being wormholes to another part of the universe would violate conservation of energy.

I'm a Ph.D. student in Theoretical and Applied Mechanics at Cornell; I love operator theory, fluid dynamics, and anything that takes more than a minute to explain at cocktail parties.