Everyone who knows me knows I am a betting man. I have an almost comical obsession with putting money down on everything, from the mundane to the ridiculous; I once bet a friend 10 bucks a Pulitzer Prize-winning author would get my name wrong in a signed dedication. (I won.)

I have, however, avoided casinos throughout my life like the plague. The windowless rooms, purified oxygen, and neutral expressions of fellow gamblers have led me to believe that casinos are some sort of terrestrial purgatory where you slowly but surely rid yourself of your sins (read: money). In this entry, I’ll try to convey just why I resist the allure of these glitzy gambling institutions and explain how the flow of heat from hot to cold is connected to the flow of money from your wallet to the craps dealer.

Say you go to a casino and play a simplified version of roulette, where you can bet on either red or black with both having equal chances of being the landed color. (You could imagine betting heads or tails on a coin flip, it’s functionally the same thing.) Since this is a casino that’s interested in taking your money, let’s say that they give you slightly less than double what you bet when you win. In addition, I’m going to assume for simplicity that you have a terrible taste in bets and gamble on red all the time. In this system, I can easily show you all the possible gambling outcomes if you just gamble twice.

Simple enough; note that there are two different ways in which you can win one bet, and a single way to either lose or win all your bets. Here are all the possible outcomes for a 4 bet gambling run: 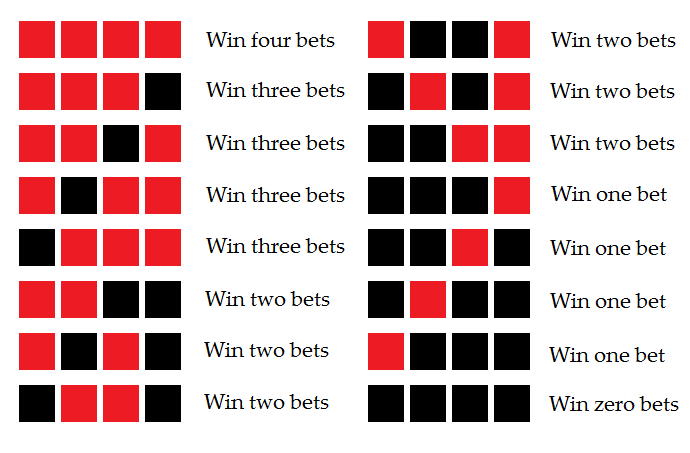 Now there are six different ways for you to win half of your total bets, while still just one way for you to lose or win all your bets. For a gambler like me, a useful thing to do is to observe the number of outcomes for a given number of successful bets, as that tells me the relative likelihood of me winning some number of bets (and that’s all I really care about). As this quantity appears to be so important, I’m going to plot it below and keep plotting it while we go to longer gambling runs.

Since the amount of outcomes is too large to list individually for bigger betting runs, let’s see how our outcome vs. betting wins plot evolves when we analyze runs from 5 bets to 150:

The amount of ways in which you can win half of your bets for a 150 bet run is ridiculously huge! In fact, I’ll type the number out just to scare you: 92826069736708789698985814872605121940117520. But the thing I want you to focus on is the fact that the graphs are getting both taller and narrower as we increase the number of bets; this means it’s becoming more and more likely for me to win a certain number of bets (half, in this case) and less likely for me to win any other amount of bets. This tendency is important to spot because every casino game will behave like this simple version of roulette when the amount of bets is very large.  In fact, the tendency is such that these plots will eventually become infinitely narrow as I increase the number of bets, leading to the following general statement for any kind of casino with any number of different games:

For a sufficiently long betting run, a gambler will always win an essentially fixed proportion of his bets.

I say essentially here because the probability of winning a number of bets close to this proportion doesn’t go down too quickly as you increase the betting run, but the difference definitely becomes negligible very fast. (If you had enough money to make a trillion roulette bets, would you care that you won 500000000001 times instead of 500000000000?) It is also not impossible for you to win every single bet you ever make, of course; it is just phenomenally improbable.

Since a casino will always manipulate payouts to ensure that winning that magical proportion of bets gives you a net loss, what this is effectively saying is that you will always lose money if you gamble long enough. And since one gambler betting a large number of times is the same as a bunch of people betting a moderate number of times, a busy casino will always make money. All an Atlantic City hotshot needs is to get morons to stay in their big ritzy oxygen chamber and cash will just come pouring out! Note that there’s absolutely nothing stopping you for walking in, winning every single bet you make, and walking away with a fortune; a sufficiently busy casino knows there’s some other poor schmuck somewhere in its glamorous bowels losing more money than you just won. And again, it’s not impossible for everyone to suddenly get a lucky streak and break the casino’s bank; it is just so fantastically unlikely that it is more probable for a plane to crash on your casino every year than to have to deal with a group of 10 people winning 15 consecutive bets at the same time.

Moving on to the science-y part of this entry, the statement I made in bold above is strongly linked to the laws of thermodynamics, which like that statement, are actually just very strong statistical tendencies. In some stable gas, kinetic energy is constantly shuffled around among all its particles, as if every particle was simultaneous gambler & casino. However, if you try to measure the kinetic energy of some large number of these, it becomes more and more likely to measure a certain total energy for a given number of particles; just like it becomes more and more likely to win a certain number of bets (half) as you increase your total bets. Take a gander below if you don’t believe me!

If the amount of measured particles is very small, these notions of temperature and pressure would not make any sense, as these quantities would fluctuate wildly for different measurements. Correspondingly, we would not be able to make any predictions based on these quantities, and thermodynamics as a field would cease to exist! Luckily, every chunk of matter at our scale contains an enormous amount of particles (a liter of water contains 3.346*1025 molecules of H2O), so it is still much more likely for a plane to crash on you than for you to read a fever on your thermometer when you’re actually fine.

Going back to the gas example, say I now heated some small section of it for a while; for a gas with a decent amount of particles, it would be very unlikely for heated particles to remain in the same region and/or avoid nonheated particles wandering close to their turf. In short, there are many more outcomes in which that extra kinetic energy gets distributed to the rest of the gas, while only a handful of outcomes in which that energy stays with the original gang in the same area. This means that the second law of thermodynamics, the fact that heat flows from hot to cold, is not a fixed law of nature; it is just an overwhelmingly likely tendency.

I’ll finish off with a little addendum; notice how quickly those numbers got big for our outcomes vs. wins plots in our roulette example. In fact, my computer couldn’t even handle doing the calculations for a betting run of 200! In order to size these numbers down in a practical way, scientists and mathematicians take something called the logarithm of the number of outcomes for a given condition (number of bets won in the roulette example, energy for thermodynamics) and base all their calculations and theorems on that. This quantity, which behaves qualitatively just like the number of outcomes for a given condition, is called entropy; and that is why you hear the second law sometimes quoted as “entropy tends to a maximum”.