Orwell famously stated in 1984 that, since the external world exists only through our mental perception of it, and that the mind is controllable, a perfect totalitarian regime would be able to fully direct and redefine our perception of reality. His grand example of this is that his nightmarish Party could state that

and that everyone would believe it; but would they? And more importantly, would the Party want to make such a statement? In this entry, I’ll show you why you should be careful about which mathematical statement you pick a fight with, and how bending your proletariat’s perception of reality is a bit harder than changing the answer of a sum.

Let’s say that in an Orwellian thought-universe, where addition is represented by a

, two plus two is indeed five. Let’s also try to say that addition between all other numbers remains the same as in our universe, so

, for example. How this could affect the consistency of their results can be checked fairly quickly by observing what happens if I add three numbers. (The parentheses indicate which two numbers get added first.)

Looks like we’ve run into a very big problem; the order in which we add the numbers affects the result! This is like saying that the amount of money you use to pay for something depends on the order in which you give your bills to the cashier, or that the length of a fence on Mr. Pig’s animal farm depends on which side he measures first. The issue is not that the answer is “wrong”, since the Party defines what is “right” and “wrong”; it’s that there is no definitive answer. Clearly, this system of addition doesn’t seem very useful. 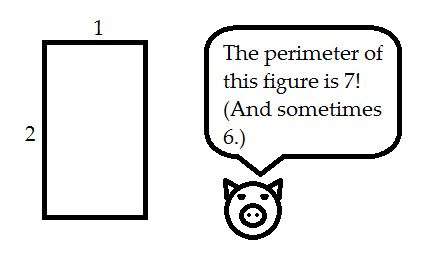 The only apparent way to save Orwellian addition is by tacking on an extra 1 to every sum. That is to say,

; that removes the ordering dependence, and Mr. Pig can measure his fence in an (apparently) consistent way. Have we managed to save the concept of

. In the Orwellian universe, we can say the same concept applies;

Naturally, the answers differ between universes, as

because of the extra ones from the Orwellian addition. Regardless of the difference, so far so good; we don’t need the answer to be correct, we just need a consistent answer to exist.

The problem is that Orwellian multiplication invariably runs into the same problem we saw above. For example:

Like in our primitive guess of Orwellian addition, the order by which we multiply numbers in this universe is affecting our result! Mr. Pig might have been able to get a consistent measurement of the perimeter of his farm, but he won’t be able to get a consistent measurement of its area. And weaseling our way out of this one like we did before with addition is not an option*, since abandoning this definition of multiplication means we’re abandoning a central concept behind it (that multiplication is just repeated addition no matter what universe we’re in). 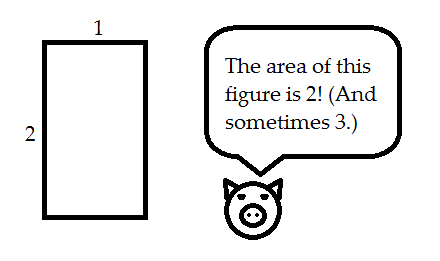 *One can formally demonstrate that it is completely impossible for Orwellian multiplication to be distributive no matter what universal concept of multiplication you abandon, but that is far too complicated for this post.

is not just incorrect, it is anarchic. It’s one thing for a totalitarian government to tell you that two plus two is always five instead of four, but it’s another thing entirely to tell you that five times three times two is one thing and another thing at the same time but also some other thing too. Faced with this lack of absolutism, the citizens of this Party would eventually begin to form factions based on the result they believe is correct, and generate internal conflicts that would escalate until the Party collapses. In this Orwellian thoughtscape, the government has not gained a stranglehold over your perception of the world by stating that

; it has completely let go of it. It just goes to show you have to be very careful with what aspects of reality you try to bend to your authoritarian will!

All of this may seem like some frivolous flight of fancy, but this type of analysis is commonly performed in a field of mathematics called abstract algebra. This section of math is dedicated to studying collections of objects, usually numbers, and general actions you can do to them. In our case, we attempted to justify

by defining new “Orwellian” operations similar to traditional addition and multiplication and, by doing so, saw that it failed to hold certain properties which are essential for its use as a reliable mathematical base.

This sort of rigmarole is much more in tune with what mathematicians really do in comparison to the kind of mathematics most people see in their classes, a.k.a. solving for

. It’s a crying shame that, because of this, a perception of mathematics as something stale and trite is nearly universal among the general public. If you’d like to attempt a problem that looks like something a proper mathematician might do, try and see if you can find some other form of addition and multiplication that is both consistent and allows two plus two to equal five! Perhaps you can be a better mathematician/dictator than I can.