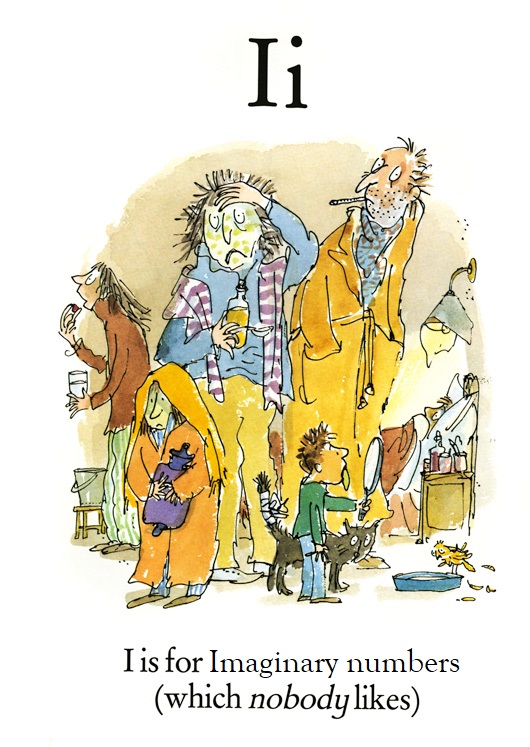 Roald Dahl was a master of the written word, and this was perhaps most exemplified by his ability to use nonsense words like “flushbunkled” and “frothbuggling” without making the reader question whether or not they are viewing the product of an elderly Welshman having a mild stroke on his typewriter. Regardless of how silly they sound to us, such nonsense words have a rich history in the English language; in fact, they form a large part of it! Back in the 16th century, Shakespeare is claimed to have invented over 1700 words that are sure to have made a few English eyes squint back in the day. Examples include fracted, propugnation, and fairly hilariously, elbow. (What the hell were they calling elbows before Shakespeare came along? Did the English just point to their elbows and go “I have some pain in my…um…well, you know what I mean”?)

In any case, this type of creativity is not limited to just dead English writers, as mathematicians have often attempted to transcend the boundaries of the established and the intuitive to make use of similar nonsensical concepts in their equations. In this entry, I’ll talk about the most commonly dreaded example of this; the often-frightsome complex/imaginary numbers.

Whenever imaginary numbers were brought up in high school math class, I’m sure mostly everyone wanted to leap up dramatically from their desk and shout “Why the hell are we studying imaginary numbers? What is the purpose of this? Why don’t we learn things like how to balance a checkbook/do taxes/apply for a job?”

If I were a high-school math teacher*, my response would be “You’re right! You shouldn’t be studying imaginary numbers.” There really is no reason for a general high-school math course to cover them, and the discussion of this kind of thing is best left to STEM-track math courses for everyone your class liked to hoist from the school flagpole. I would be happy to leave you to your Balance a Checkbook 101 class, where you can revel in the fact that you are taking a class for something that is both mind-numbingly tedious and so conceptually simple that you learned all the skills to do it when you were 8 (except for the skill to realize that you don’t need a state educator to remind you how to add and subtract).

The point of this entry, however, is not to tell you whether or not you should know about imaginary numbers; in fact, I’m not even going to try and explain what they are. My goal here is to try and explain why they’re useful to Melvins like me. And, like your high-school math teacher trying to explain why model trains are a fun and interesting hobby, I probably won’t do a good job of it.

The gist of it is that, like nonsense words, the importance of imaginary numbers lies not in what they are but rather what they do; how they interact with the rest of the normal parts of the medium, be it literature or mathematics. It doesn’t matter what the Gizzardgulper meant when he squawked “I is slopgroggled” in The BFG, it matters what this implies about the giant’s ability to speak the English language and the richness of context such a simple statement can provide to a book. In the same sense, imaginary numbers would just be some daydream an Italian guy had in the 15th century if they didn’t let us use the very simplest tools in math (adding, multiplying, etc.) to perform some interesting and useful tricks.

Take, for example, what happens when you multiply

by itself some number of times. (I’ve graphed the results below.) Nothing strange or unexpected here; feel free to check that

actually is doesn’t matter; what matters is what the values of the multiplications are once I get rid of all the gunk that has 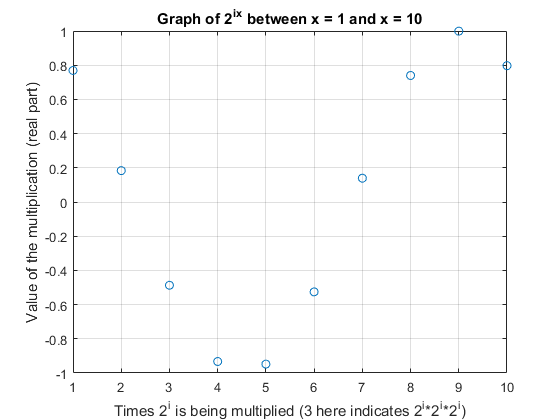 See that? The value is oscillating! We’d see the same thing if we tried multiplying something like

, except the frequency of the oscillations would change.

As it turns out, the chief usefulness of imaginary numbers is that they make it very easy to describe things that oscillate*, and this is what makes them show up everywhere from electrical engineering (currents in wires tend to oscillate, hence why AC stands for alternating current) to quantum mechanics (the central object of QM has wave-y behavior). Imaginary numbers are not required to describe any of those phenomena, but trying to avoid them requires altering your math so much that you generate things almost as nonsensical as them anyways. Attempting not to use them because they don’t “feel” right is just as gauche and annoying as it would be for you to keep calling your elbow “the thing that connects your upper arm thingy to your lower arm thingy”.

*Clever mathematicians have found other surprising uses for complex numbers, such as finding the areas under curves that are mathematically difficult to deal with, but these applications are more esoteric than anything.

Imaginary numbers are certainly not the only nonsensical objects that mathematicians have come up with; they stand in company with a bounty of strange concepts that have been invented over the years, like numbers that represent the size of infinities or numbers that aren’t really numbers at all. And the fact you can’t conjure up an image of

apples shouldn’t deter you from thinking these ideas are somehow different from the numbers you’re familiar with! After all, Shakespeare also invented words like moonbeam, submerge and obscene. These words would’ve sounded just as strange to 16th century Englishmen as fracted and propugnation; the only reason we find them normal is because we’ve always used them. If we did the same for complex numbers, it might be possible for us to easily imagine balancing

apples on those jointed pointy things at the end of our hands.

1 thought on “On Writing Nonsense and Getting Away With It”