This is the first of three entries on quantum mechanics.

You see, quantum mechanics, thanks to its esoteric charm and strange predictions, serves as a magnet for all sorts of kooks and cranks who are raring to tell you that all your problems can be fixed with a quick dose of quantum snake oil. The reason they get away with this is two-fold:

The first is a regrettable but expected consequence of trying to get people engaged with physics. Just like everyone going into acting dreams of being the next big Hollywood star, most would-be physicists started getting into the field because they thought they’d figure out the secret to time travel/teleportation/etc. and saw quantum mechanics as their “in”. (This sometimes being because a book by [insert pop-sci author of choice] talked about things that sounded like that).

The problem with this is generated by those who decided not to continue their interest in quantum mechanics through formal study, and proceeded to take all the fanciful metaphors and simplified explanations in these books literally. Then they see someone famous tell them that they can improve their life through some weird mystical quantum nonsense, conclude it matches more or less what they read in those pop-sci books, and get reeled right in.

I am intimately familiar with the allure of this quantum quackery because I was one of the suckers who fell for it! In fact, the entire reason I got into physics in the first place was because, when in high school, I watched a “documentary” on quantum physics by what I later learned was an insane cult whose leader believes she can psychically channel a Lemurian warlord from 33,000 BC. (I’m not kidding.) It was only after I had made several science teachers worried about my opinions and took a proper look at quantum mechanics that I realized how much of a moron I had been. I still remember the look* on my physics teacher’s face when I told him that people can control the molecular structure of water with their thoughts.

*It was a liberal mix of Vietnam war flashback thousand-yard stare and that face you make when you find your dog took a dump on your carpet.

In fact, why don’t you take a look for yourself! Watch Academy Award-winner Marlee Matlin really earn her paycheck by listening to a Liza Minnelli lookalike tell her about how saying nice things to water can make it “better” (and also through getting hit on by who I can only describe as the used car salesman version of Cipher from The Matrix).

Seriously, the only thing that could have made that guy creepier is if he pulled out a ticket wheel and offered her a VIP pass to climb Mt. Baldy. But I digress.

It’s worth noting that the reason I got suckered into believing this garbage is precisely because nothing that anyone said in this fake documentary sounded at odds with what I had read in pop-sci books. In fact, every single book talked about what QM could do and no one talked about what it couldn’t do. So I’ll jot that down as one of my tenets for my following entries on QM; explicitly lay out what quantum mechanics can’t do.

The second item on my list is a more fundamental result of the difference between the language of mathematics and conventional spoken/written language. Just like there are certain words in other languages that are untranslatable to English (saudade, hygge), most of physics is not fully translatable into any verbal language. The most we can get away with, as is the case with the words above, is to try and give our best attempt at nice albeit incomplete explanations of it. If that wasn’t the case, why would we even bother putting up with math at all? Physicists could just learn everything we needed to know through blog posts like this one instead of expensive math-laden textbooks! And like the meal descriptions at your local dodgy Chinese buffet, when things are hard to translate, you usually wind up getting at least a little bit of nonsense. 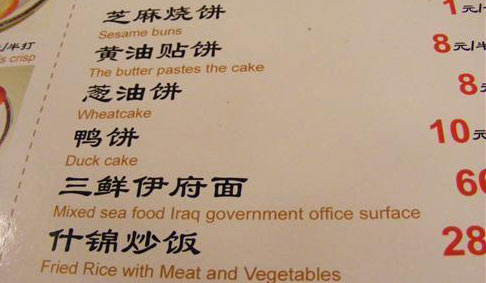 The people who tend to succumb to this the most are philosopher types who want to associate the concept of quantum mechanics to some particular metaphysical or philosophical viewpoint. And that’s totally fine! In fact, all of science was originally conceived for this particular purpose; that’s why it used to be called “natural philosophy”. But the necessity of learning the mathematics that QM is written in to make that sort of argument is paramount. For example, I once had a discussion with a philosophy student that went something like this:

Prickly, I know, but trying to argue philosophical viewpoints in QM without using the math is like getting an orchestra to play Strauss’s Also sprach Zarathustra by humming what they should play to them without any sheet music. It is, although theoretically possible, hilariously time-consuming, and almost certainly going to sound like this.

Does that mean that all pop-sci descriptions of QM are useless? Of course not! But what it does mean is that all pop-sci descriptions of QM are going to be incomplete, and the best that us pop-sci writers can do is to point out those missing pieces in our write-ups. So let me put that down as my second tenet: I am going to tell you what parts of QM I haven’t explained or don’t fit my analogies. Essentially, if you can’t spot the mistakes in your pop-sci explanation of quantum mechanics, the mistake is that you’re explaining it.

It turns out that, once you establish one or two mind-boggling things, everything else is fairly obvious! In fact, if after reading these entries you come away with the idea that quantum mechanics is boring, I will have been doing my job.

1 thought on “Quantum I: On Being a Former Crackpot”