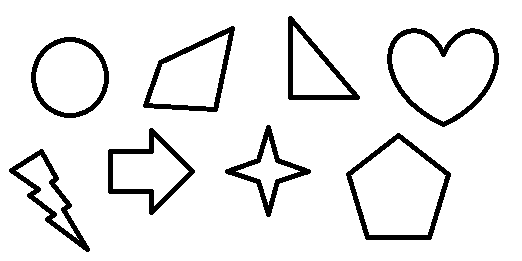 Entropy is a tricky concept. Although it pops up everywhere—take this scene from Portlandia, for example—there are many different definitions for it, and as a result it tends to be hand-waved around as some kind of measure of “disorder” when explained in a casual situation. That being said, entropy is such a pervasive concept in physics that it has been blamed for anything from the eventual heat death of the universe to the fact that time exists as we know it! So to try and give this topic the attention it deserves, and to dispel the notion that entropy is somehow fundamentally tied to disorder, I’ll try to demystify the concept of entropy without ever touching on disorder by presenting a fairly specific (but conceptually broad) definition of it.

Consider some sort of “shape generator” that randomly pops out either a diamond, arrow, or circle with equal probability. In fact, you’ll find an (only approximately random) gif version of such a contraption below!

*The formal name for these in statistical mechanics doesn’t make much intuitive sense here.

Now I’m going to block off some information from you by taking the exact same shape generator from above and putting a blue bar over the right half of it. Try picking a shape below now!

Notice that, even though the underlying shape generator is the same, you can only pull out two distinct outcomes out of this blocked generator compared to the three in the unblocked one; triangle or semicircle. (This is because the left-hand side of both the arrow and the diamond are exactly the same.) We can call the shapes we get from this generator incomplete shapes since they don’t show the underlying shape completely thanks to the blue bar.

From an informational perspective, the blue bar also doesn’t let us fully know what the underlying shape generator is; someone who has no idea what’s under the blue bar might not even think of—and can’t prove—the fact that there are two distinct “triangle-y” shapes. This is because, although the semicircle in the blocked case indicates a circle in the unblocked case, the triangle in the blocked case doesn’t uniquely correspond to either the diamond or the arrow. And this is precisely where entropy comes in. 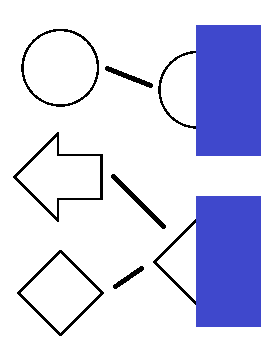 In a roundabout way, entropy is giving you a quantitative measurement of how little information you get about an underlying system when you observe some specific “blocked” or inefficient measurement of that system.* A shape with large entropy has a large number of lines attached to it, which means that a bunch of complete shapes could be associated with the incomplete shape; a shape with low entropy has only a few complete shapes associated with it, which gives you less uncertainty about the underlying shape, and by extension, the underlying generator creating those shapes.

That’s mostly all there is to it! One important thing I have to mention, which I consider a bit of a boring formality, is that the proper definition of entropy is actually the logarithm of the number of lines between each shape. This changes nothing about the qualitative statements I made above and, depending on your point of view, is more pragmatic than fundamental; it’s done chiefly so that if I have two identical shape generators and pulled out two triangle shapes, the entropy of both of those triangle shapes together is the sum of each individual triangle entropy rather than the multiplication of them. Bo-ring!

What does this all have to do with thermodynamics? Well, in thermodynamics, we’re dealing with massive ensembles of individual physical objects (atoms/molecules) with many different physical properties such as energy, momentum, and so forth. Because it’s hopeless to keep track of all of the properties of all of these individual objects, we decide to “block off” our information about every individual object and keep track of only averages of these quantities in the entire ensemble. This then automatically defines an entropy connecting each of these “incomplete” averaged measurements to the “complete” collective states of the individual objects. And, if the largest entropy of an averaged measurement is far larger than the second-largest entropy as in the multi-triangle scenario in the paragraph above, then it is overwhelmingly likely for the ensemble to be in that largest-entropy state.

Note that disorder never even came into the picture! The connection to disorder only obviously pops up when your “complete” system consists of a very large amount of identical subsystems, in which case the most likely incomplete measurements tend to be ones with little “organization” (and, by extension, little information) in the complete underlying system. In short, entropy is only a measure of disorder when disorder implies a lack of information about the system. And if you’re interested in seeing some examples of this, well, you’ll have to do a little bit of extra reading.